"Paul Walsh’s new, idiomatic translation offers clear language that does not add to the necessary obscurity of a dream, but is very lucid without any loss of poetry and charm. The design team has done extraordinary work — a nearly bare stage features one primary set piece, a luminous box that can be moved about and seems simultaneously abstract and concrete. The costumes are effective and props are appropriately suggestive and cartoonish. The remarkable sound design by Cliff Caruthers deserves particular mention.

Each playing multiple parts, the entire company works as a remarkably tight ensemble. Each actor seems to be actually dreaming for us. This is difficult to describe, but wonderful to behold. The various characters, with their different complaints and loveliness, play upon our empathy and give us the kind of emotional ride for which theatre is created.

There are many memorable moments, but here are a few random callouts: Ponder Goddard as Agnes, falling to earth at once willing and resisting. Josh Schell as an officer and a lover, calling to his lady Victoria with a lifetime of longing and worship packed into a single word; Carl Holvick as a wonderfully haughty Chancellor; Marilet Martinez as an archetypal Gatekeeper; Kunal Prusad as the Naval Officer; Kirsten Peacock as the adored but perhaps not adorable Victoria; Carina Lastimosa as an ethereal Ballet Dancer; Rhadika Rao as a student.

For all these excellent characterizations, it is also true that no single actor stands out because the ensemble is as tight as a philharmonic symphony. Although each member has featured moments, it is the whole that moves us. Ensemble work of this caliber is a rare achievement and should be celebrated!

Hooray for Cutting Ball, director Rob Melrose, and an extraordinary company for this fine and delicate rendition of “A Dreamplay.” August Strindberg would be very pleased." 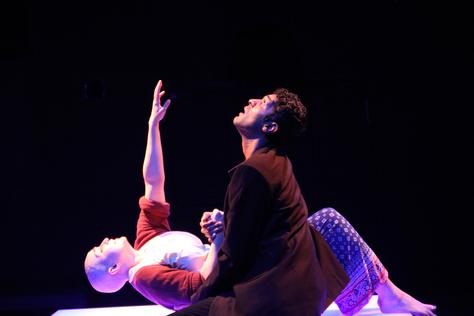 'Dreamplay' is his valedictory directing project.

Sound designer Cliff Caruthers . . . does some of his best work with this production . . . (by) endowing the whole show with the sense that someone is watching over the proceedings."

Melrose and Cutting Ball have created a significant niche on the local scene as purveyors of rarely produced European plays of the last century, featuring absurdism and other new forms. The company has staged all of the Swedish playwright’s chamber plays (also translated by Walsh).

“A Dreamplay,” which is completely unlike Strindberg’s most famous play “Miss Julie,” is considered to be the first Western non-naturalistic play, a precursor to both expressionism and surrealism. Strindberg used “dream logic” as the context within which to trace the fraught and sometimes mystifying journey of a young woman, Agnes (gracefully portrayed by a shaven-headed Ponder Goddard).

On the verge of dying, Agnes dreams she is the daughter of the Hindu god Indra and is sent down to earth to learn why everyone is so unhappy.

As she wanders the world, she interacts with a host of characters: a gatekeeper, a lawyer (whom she marries and with whom she has a baby), professors, an amorous young couple, a long-suffering suitor (a particularly affecting and at times delightfully comical Josh Schell) and many more.

Little by little she arrives at a deep understanding of, and compassion for, the nature of human misery, in all its dichotomies and contradictions.

The characters’ intensely expressed emotions, the magical changes of time and place and the choreographed stage movement — underscored by especially potent and often ominous sound effects by Cliff Caruthers — are in elaborate service of Strindberg’s existential truths.
–Jean Schiffman

"Goddard is an ephemeral Agnes, and her performance has a luminous quality well-suited to her character’s godly lineage. Her shaved head is like both a monk’s and a newborn child’s, a choice that nicely captures her dual presence on earth: that of the infant, learning the ways of human society, and that of the enlightened, a celestial visitor. The rest of the eight-person ensemble, many of whom take on multiple roles throughout the performance, etch moments of sheer comedic delight into Strindberg’s sprawling play, which, just like a dream, slithers and morphs unrelentingly."

Full Archival Video of A Dreamplay:

A DREAMPLAY - THE CUTTING BALL THEATER