Named one of the Top Ten stage productions of 2005

by The San Francisco Bay Times

"The Cutting Ball Theater's new production explores the pair's childlessness by playing up the often-dismissed fact that they likely just lost a baby. The first time we see Lady Macbeth, for example, she's alone in an empty nursery with a bassinet and abandoned dolls. Also, the dialogue of the three witches on whom Macbeth relies for details about his future is interpreted here as fragments of his mourning wife's conscience, even though the witches themselves are mirror images of him."

"Director Rob Melrose and Cutting Ball Theater take a bold, innovative approach in a slightly cut, intriguingly rearranged, inventively staged version of Shakespeare's great tragedy that looks at the Macbeths as the parents of a dead child and downplays much of the witchcraft."

"This Macbeth is intriguing, intellectually involving, visually imaginative, and -- best of all -- funny." 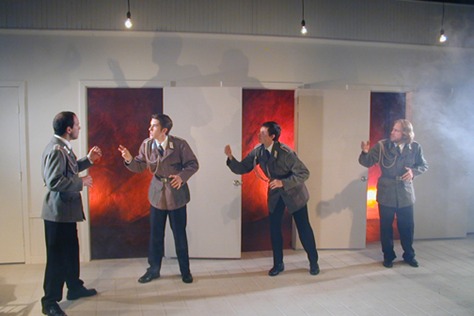